The season seems to be drifting away from Chennai Super Kings. They would put it down to profligacy in the death overs and stutter in the first half of their own innings. Or just the reality that Virat Kohli blew them over with a masterly unbeaten 90.

It took the 47th delivery he encountered on the day, and the first ball of the 20th over, for Virat Kohli to attempt something blatantly T20-ish. He scooped a boundary over fine-leg, and in the process ended up with his back on the ground. He flashed a sheepish smile towards the Royal Challengers Bangalore dug-out, his eyes perhaps searching for AB de Villiers, who is more accustomed to unfurling this stroke. It might have been his tribute to AB.

Kohli’s ability to make late adjustments stood out. There was an unusual bit of premeditation that made Dwayne Bravo bowl wider. But Kohli dragged his body wider to get in line with the ball, crouched and swivelled, to get the stroke squarer of the wicketkeeper.

Apart from that stroke, the knock was characteristic Kohli, in which he made T20 batting look grossly uncomplicated and risk-free. For the quality of stroke-play, and its intrinsic orthodoxy, it could pass off as a high-calibre ODI innings. The game of greats is frame-worked to suit every format.

Until the very end, the tempo of the masterpiece was ODI-ish, as Kohli would tigerishly run the singles and twos, jam the occasional boundary and ensure that the run rate increased incrementally. When the death overs ringed in, he spelled doom for the bowlers. He pillaged Sam Curran for a brace of sixes in the 18th over, which cost 24 runs. The second of the sixes was a piece of improvisational genius. The delivery was sliding away with the angle, but Kohli made a couple of strides down the track and wristed it over square-leg. 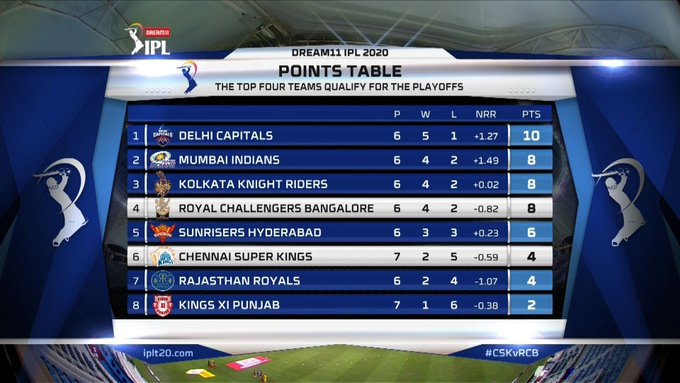 The art of pacing an innings could not have been more exceptional — the RCB skipper was 34 off 30 balls at one stage, and ended up on 90 from 52 balls, thus scoring 56 off the last 22 balls. At one stage, especially in the 11th over when Bangalore lost Devdutt Padikkal and de Villiers in the space of five deliveries, even 150 seemed a distant score. But Kohli ensured they set a target of 170. The scoop was just the cherry on top of the cake.

A thunderous flat six over long-on triggered anticipation of MS Dhoni rolling back the years and lifting CSK from the brink of a defeat. But that was not to be as he holed out to long-off in the same over. But by the time he strode into the middle, the match had already slipped out of CSK’s grip.

Yet again, Chennai lost steam in the middle overs. Agreed that the surface was two-paced and Bangalore’s bowlers probed niggardly lines, but their batsmen were equally culpable of lethargy, unable to break the shackles in the midst of a dot-ball onslaught. From the sixth to the 12th over, they eked out only three boundaries, managing just 37 runs in the span. That’s passable if they had a high-scoring powerplay, but Chennai had managed just 26 runs in the first six overs. The lack of intensity was appalling.

Leaving it late is a formula that has worked for them in the past, but with Dhoni a force on the wane and the new generation refusing to come of age, the template seems outdated. Age has caught up with them, literally and symbolically.